CHINAKA tradtional food of the TUMBUKA people of Zambia in Southern Africa is perhaps equivalent to the Western BOLOGNA with the exception that Chinaka is a vegetable. About Three Thousand and Five Hundred years (3,500) ago, the Babylonians stuffed animal intestines with spiced meats and invented what we call the modern “sausage” and eventually the “hot dog”. Egyptians discovered the baking of bread in Two Thousand Six Hundred B.C (2,600 B.C). They went on to discover the baking of more than fifty different loaves. To day the meat sandwich is perhaps the most common modern meal particularly in the urban world. The various types of sausage to day are named after towns in which they were invented. For example, frankfurter (Frankfurt an Main, Germany), bologna (Bologna, Italy) and romano (Rome). Salami (Italian “to salt”) derives its name from the salting process. 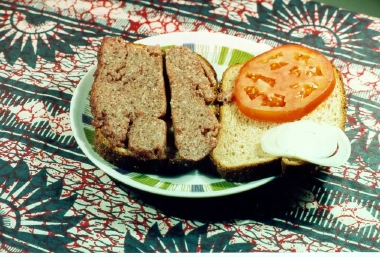 Perhaps about a few hundred years ago, Africans may have invented a tasty sausage, which does not use any meat at all. This type of “sausage” is eaten especially among the Tumbuka people of Eastern Province of Zambia and Northern Malawi in Southern Africa. The Tumbuka, Ngoni, Chewa, and Nsenga people comprising over one million Africans in Southern Africa also eat the same dish.

This sausage, known as Chinaka or chikanda, according to Zambian linguistic and dialect variations, is eaten and enjoyed in the rural areas. Many urban Africans eat a wide variety of traditional foods whose origin is in the rural areas. Chinaka can be bought in the compound markets of urban Zambia. Urban Zambians jokingly call the food “Zambian bologne or sausage.”

Chinaka is a food that is cooked from a tuber, the size of small potatoes, found in the wild. It is cooked with peanut powder and spices. In rural Zambia it is eaten with the nshima meal. In urban Zambia it is sold at markets eaten normally as a snack. The result is a delicious Chinaka sandwich to which you can add the usual optional cheese, onion, or lettuce. This is a vegetarian’s delight and dream. 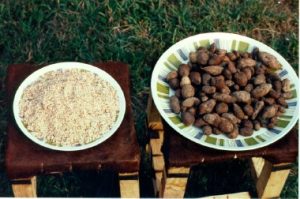 2 Cups grounded Chinaka tuber
1 Cup grounded raw Peanut Powder
2 Cups Water
1/2 Teaspoon Baking Soda
1/2 Teaspoon Salt
1/4 Teaspoon red Cayenne Pepper (optional)
Pour two cups of water into a medium sized pot. Place on medium heat for two minutes. Add half a teaspoon baking soda, half a teaspoon salt, and quarter of a teaspoon red pepper. Stir until well dissolved. Add two cups ground Chinaka and one cup of raw peanut powder and stir slowly until thoroughly mixed. Contents will gradually boil, thicken, and sputter. Cover, lower heat, and cautiously stir every three to five minutes. Simmer for fifteen to twenty minutes. Remove from range and immediately empty the solid Chinaka on to a platter. Smooth the top of the chinaka with the back of a large spoon. Chinaka will thicken as it cools down. The chinaka should have the look of a large un-sliced bologna. When cold, cut the chinaka into desired slices to be served as delicious sandwich cuts or served and eaten with other meals. Traditionally chinaka is eaten as dende, ndiwo or relish with the nshima Zambian staple food.

ACKNOWLEDGEMENT: The author would like to thank Dr. Mapopa Mtonga, Lecturer in Theater and Performing Arts at the University of Zambia, for his suggestions and comments on this chapter.