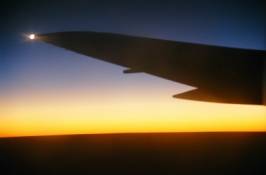 My son 16 year old son, Njenje (not his real name), and I flew out of Dulles airport in Washington DC on June 14 at 10:40 pm. We were going to our home village in Zambia to visit my parents and other relatives. We were also to visit the Luangwa Game Park and the Victoria Falls. The flight to London was five hours long. Njenje sat up and watched movies all night. I dozed on and off. But there was a young kid in the back who kept kicking the back of my seat throughout the night. The mom was zonked out and I was not about to tell a strange kid to simply stop kicking the back of my seat. When we landed in London, in the light of day as we were disembarking, I found out the mystery kid was a 13 year old girl who should have known what she was doing. We had a 10 hour wait at Heathrow airport in London. I changed some money into British pounds. I always feel uneasy when the fifty dollars shrinks to less than 25 pounds. I bought a phone card and called my wife in the US, my uncle in Lusaka, and tried to reach my friend in Leeds a couple of times but to no avail. The phone card use took a while to figure out. I bought a short wave radio. My son and I ate something. Eventually, he ate a hamburger and fries that cost 7 British pounds. Have you ever eaten a 14 dollars burger and fries? Airports are expensive.

We took short naps on benches all day. We could have gone into down town London but we did not want to deal with the possible hassle of going in and out of the airport. We took off for Lusaka at about 7:00 pm. My son zonked out as soon as we ate dinner. I slept too. When we woke up, there was a bright and reddish glow in the eastern horizon. It was early morning and we were about an hour from Lusaka. We were both very excited.

We landed at 6:30 am to a fresh crisp morning in the Zambian winter. The grass and trees were brown and the air was very dry. It was pleasant. We breezed through immigration and met my uncle outside in the arrival lounge. He expressed surprise at how the 16 year old had grown since 2000 when we visited and he was only 11 years old then. A young male relative put out bags into the jeep and we headed to my uncle’s farm just outside Lusaka.

The first thing that struck us driving along the road from the airport is how we were driving on the left. There are people and movement everywhere. People are driving, walking, women are carrying things on their heads, there are lots of people riding bicycles, kids are walking to school, and there are green and white public transport mini buses everywhere. There is more action per square block in the city than you see anywhere in the US outside downtown of a major city. By comparison the towns and suburbs in the US are ghost towns.

After meeting my aunt, washing up, and eating some breakfast, my uncle gave me the pick up truck keys. I was driving into town with my son and 24 year old niece to change some money and do some shopping. In less than two hours, I was driving on the left side of the road and navigating the driving in the capital city of Lusaka. Let me put it this way: driving downtown Lusaka for anyone who is not used to it is a sure invitation for a possible cardiac arrest. You have to have nerves of steel. 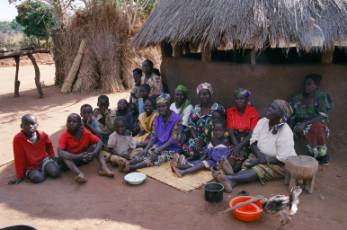 We arrived at our home village during mid afternoon in the rural provincial district of Lundazi. Numerous relatives; my parents, nieces, nephews, cousins, sister-in-laws, grand parents, all came to see us. They came in one after another. After a while my son had learnt to at least say: “Nili Makora” in the Tumbuka language. Our guest hut had been immaculately renovated and the floor smelt great. We slept in our sleeping bags with a mosquito net around us. We ate nshima with the unique tasting delicious chicken. During the first night, the twinkling stars against the pitch-dark night awed us. And then the moon came out huge and bright. We ate 10 chickens in 11 days. When we left, my son said we would miss the village and its serenity. We both felt sleepy at 8:00 pm because it got dark and human body just wants to sleep. Then I would wake up at 6:00 am to a fresh brisk morning with birds singing and roosters crowing.

This was out first night in our chalet at The Wild Life Camp at the Luangwa Game Park. The camp we stayed at is on the bank of the Luangwa River. We heard hippos all night, owls, hyenas, and an assortment of wild animal sounds. 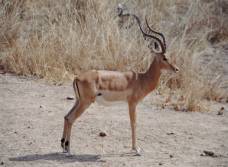 Our first game viewing was at 6:00 am after we had breakfast of toast, hot tea, and cold cereal with milk. The excitement of seeing that first wild animal is memorable. There were two buffaloes staring at us from about 50 yards. Once we were in the Game Park, the feeling of utter wonder are overwhelming to see Impalas, monkeys, elephants, giraffes, birds, hippos, etc etc. in their natural habitat. 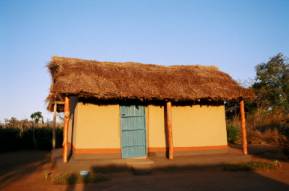 We arrived in the town of Livingstone on the border with Zimbabwe to see the Victoria Falls. During that morning after seeing the falls for two hours, I made this entry in my notebook:

July 21, 8:45 hours Zambian time. I am sitting here trying to capture an enduring experience of the falls. I just stood there mesmerized but also deeply moved by the sound and sight.

Millions of gallons of water falling over a cliff thousands of feet deep. The cliff stretches for miles. There are multiple rainbows as the mist of water rises above the deep huge gorge. There is a continuous deep loud swishing and thundering sound heard for miles around. There is nothing like it anywhere in life or in the world. The Tonga called Mosi-o-Tunya ­ the smoke that thunders. Ahhh!! Oh! Oh! Is all I hear from people. 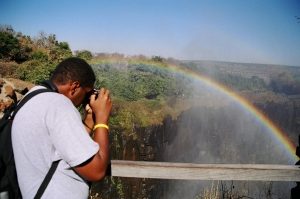 One woman said: “Awesome!!” It is a captivating and enchanting experience. It evokes religious feelings about the power of nature. My son Njenje is the one who put it best when he said a camera photo, camcorder, and all the tons of gismos people bring to the Falls to capture it are futile. You have to go and not just see it; but experience it. The splendor, power and magnificence of the falls are humbling. It is 5 hours flight to London from DC, 9 hour flight to Lusaka and then a 5 hour drive to the Falls. Its all worth it as it is a life time experience. If you ever saw it now, it would change your life for ever in a positive way..

My son and I flew back to the US. Since I have come back, I am convinced that all people who are doing serious creative, spiritual and work that profoundly impacts other human beings should visit the Victoria Falls, the Game Park, and the typical Village. I don’t mean visiting in the usual; “Well I went there and saw the Falls and took some photos, its awesome, and now I am back here.” 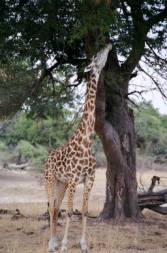 I think people should go to the Park and really take sometime to see and observe the animals. They should contemplate. They should sit and experience the Falls for hours. Spend a day and night in the serene village, talk to people who take their sweet time to talk and visit with you, and really look at the stars at night, and the moon. Teachers, Priests, Creative writers, serious artists, and especially storytellers should all have these experiences. 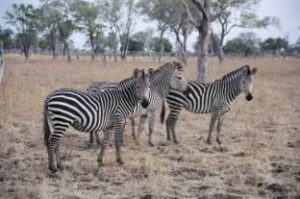